Get free medical advice on your first query

Ask a health query to our top doctors 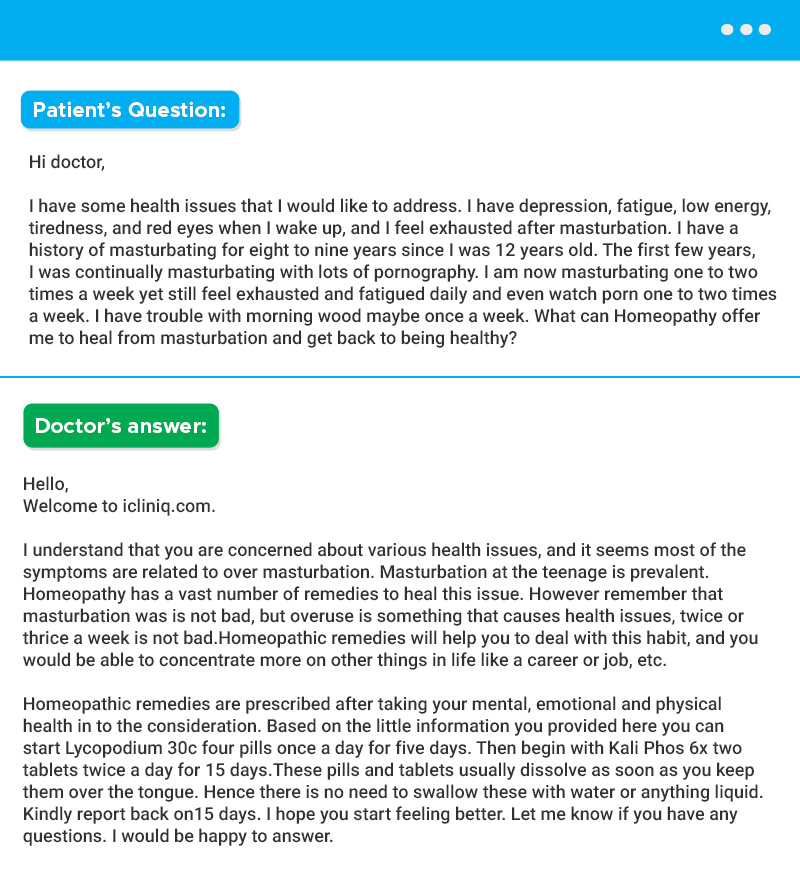 Consult User Reviews About How it Works

Homeopathy is an alternative system of medicine which was founded by a German doctor and chemist by the name Samuel Hahnemann in the 18th century. Homeopathy is based on the Law of Similars which states that ‘like cures like’.

The medicines in homeopathy are called remedies and are derived from natural sources such as plants, animals, and minerals. They are diluted according to standard procedures and techniques until the original substance is no longer detectable.

The foremost principle of homeopathy is that no two persons have the exact same symptoms for a disease. That is why it is not necessary for two people with the exact same condition to receive the exact same medication. The doctor prescribes the drug to each patient based on their body type (constitution) and overall health.

Also, the remedies do not intend to suppress the symptoms but provide cure by activating the body’s own healing mechanisms. So, initially, there might be an aggravation of symptoms in some cases. But, that is only for a small phase, and it is followed by a permanent resolution.

Homeopathic remedies are effective in curing most acute as well as chronic conditions and promoting general health. They are usually given in such small doses that side effects are nil. It is a very personalized treatment and is safe for all to use. That makes homeopathy the most popular type of alternative medicine across the world.

What Our Users Say?

"Very satisfied! It was very clear and helpful"

--Someone from New York City,United States.

--Someone from Addis Ababa,Ethiopia.

"Thanks for your valuable information Sir"

"Alright thank you so much Doc"

"Good to see your fast, positive and happy reply"

--Someone from City Of London,United Kingdom.

"Thanks for your time and support sir. I really appreciate it. God bless you"

"Thank you so much for ur quick response,ur answer was really helpful, more grace"

"Good medical advice and timely replied and thanks a lot"

--Someone from Brčko,Bosnia and Herzegovina.

"Thank you Dr Shelbi. You have been very helpful"

"She is the best gynaecologist"

"Thank you so much;you released my stress"

"Thank you so much icliniq. Doctors are very responsive and showing empathy to client. I ... "

"I'm so thankful to you for your response"

"Good to know your answer, it helps me to challenge my arguments. Thank you"

--Someone from Central,Hong Kong SAR China.

"Happy with the consultation"

"Thank you very much Doctor, God bless you. I will do as you advise me"

"May you get well soon. Stay blessed"

"Excellent experience with Dr Khan, the experience comes through as well as conscientious ... "

"Thank you for making my condition cleared"

"Very empathetic, quick to respond and detailed informative response, thank you so much"

"Thank you for the feedback really appreciate it"

--Someone from Cape Town,South Africa.

"Quick, clear, and concise. Thank you"

"Glad that got response so fast"

"Thanks a lot,i was very worried now iam relaxed"

"Great and prompt support from the Doctor.Thanks a lot"

"Thank you soo much for your prompt response. Much appreciated. I m feeling well now"

"Thanks a lot Sir"

"THANK YOU SO MUCH"

"Gr8! Such a prompt reply.Hats off to you Sir"

"Very good. I really appreciate it"

"I am really happy to say that the problem I had been facing is now completely recovered ... "

"Thank you so much Doctor I will definitely get it"

"Thank you so much for your swift answer Dr. I will follow your advice"

"Detailed and fast response thank you"

"That was a very good response from a very professional person"

"Thanks a lot Madam for Helping us"

--Someone from New Delhi,India.

"Thank you for the quick reply. This sounds reassuring"

"Thank you very much! This helps a lot. I'll surely try these"

"Thank you so much"

"The doctor is excellent. He has explained it thoroughly and clearly. I would recommend ... "

"Good feedback, all my questions were answered"

"Thank u for the advice..it's kinda relief to hear it"

--Someone from Addis Ababa,Ethiopia.